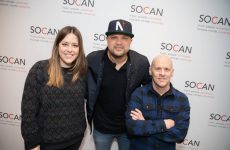 Melissa McClelland and Luke Doucet of Whitehorse discuss their 2019 JUNO Awards nomination – surprisingly, in the Adult Contemporary category – for their seasonal album, A Whitehorse Winter Classic. It’s their fourth nomination, in their third category (after Blues and Adult Alternative Album of the Year, which they won in 2016 for Leave No Bridge Unburned).