The Music Managers Forum (MMF) presented Daniel Caesar and his managers/producers/co-writers Matthew Burnett and Jordan Evans with the Banner Year Award – sponsored by The SOCAN Foundation – at the 2018 MMF Honour Roll dinner on May 8, at the Bymark Restaurant in downtown Toronto. Charlie Wall-Andrews, Executive Director of the Foundation, attended the celebratory dinner, held during Canadian Music Week, where the MMF presented the honour to Caesar and Burnett, though Evans was unable to attend.

The award recognizes the meteoric rise of the JUNO-winning, Grammy-nominated R&B and soul singer-songwriter Daniel Caesar this year. Caesar released his critically acclaimed debut album Freudian in 2017. Co-managers Matthew Burnett and Jordan Evans also co-produced the album, and co-wrote several of its songs.  Freudian featured the No. 1 Urban AC hit “Get You,” became the No. 1  iTunes R&B/Soul album, and earned national television performances for Caesar in the U.S., on The Late Late Show with James Corden, Late Night with Seth Myers, and one with Chance the Rapper on The Late Show with Stephen Colbert. Two songs, “Get You,” and “First World Problems” even made it onto former U.S. President Barack Obama’s year-end list for 2017. Caesar’s debut world tour is selling out everywhere, including a five-night run at The Danforth Music Hall, in his hometown of Toronto.

SOCAN presented a 2017 SOCAN Award and two No. 1 Song Awards to representatives of Kobalt Music Publishing U.K., at the SOCAN Toronto offices, on May 10, 2018 – while they were visiting our country during Canadian Music Week, to meet with various organizations with which they’re affiliated. 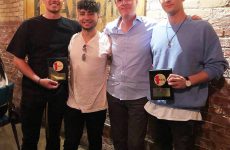