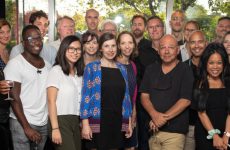 Calling all Indigenous hip-hop, rap, and spoken word artists, poets, singers, audio storytellers, and podcasters! The National Film Board of Canada (NFB) and the imagineNATIVE Film+Media Arts Festival are partnering to launch a call for Indigenous voice artists to apply for the eighth annual $50,000 Digital Project Prize.

This year, the organizers are inviting Indigenous voice artists to apply to create something new, a digital or interactive experiment. The project can be anything: a new kind of music video, a live performance, even an app for your cellphone.

Whatever you come up with, it’ll be based on the words and voices of Indigenous artists. You’ll bring your idea to life with a team of creators assembled by the NFB and imagineNATIVE. The completed project will be exhibited and performed at the imagineNATIVE Film & Media Arts Festival in 2020, and distributed online.

Submissions are open until Aug. 24, 2019. For more information, and to apply, click here and scroll down to “Prize Rules.”