When it signed an agreement with Sacem in 2016, SOCAN became the first North American authors’ society to entrust a European collective management organization with a mandate to represent its songwriters, composers, screen composers, and music publishers in the European market. Sacem has announced the renewal of this agreement with SOCAN for the management of rights on internet services, and added that the deal would be extended to include the mechanical reproduction rights of SOCAN’s repertoire in Europe.

SOCAN and Sacem said their accord covers the management of performance rights on European internet services for the more than 160,000 SOCAN members. Since the beginning of their partnership, SOCAN has benefitted from Sacem’s expertise in online rights management and has had access to URights, the copyright management platform for online music that Sacem developed in partnership with IBM.

On the strength of their first agreement, SOCAN has renewed its confidence in Sacem to continue to manage the performance rights of its members. The new deal encompasses the addition of the mechanical reproduction rights that Sacem has handled since 2018, following SOCAN’s acquisition of SODRAC, the society for reproduction rights of authors, composers, and publishers in Canada.

SOCAN’s digital revenue has increased significantly since it entrusted Sacem with managing online rights of the works in its repertoire. The crisis the music industry has been experiencing has reinforced the growth of online music consumption and confirmed that it is, more than ever, a strategic and pivotal source of revenue for music creators and publishers. Sacem will continue to make every effort to optimize the collection of rights for the works in the Canadian repertoire that it represents, and to ensure, with the greatest transparency, the most accurate distribution possible.

Said Jean-Noël Tronc, Sacem CEO: “The renewal of this mandate with SOCAN is a great vote of confidence and confirms our ability to defend the interests of music creators and publishers in an increasingly digitized world. We’re honoured to continue this partnership, and to put our expertise and the power of our tools at the service of SOCAN members.”

Said Jennifer Brown, SOCAN’s Interim-CEO: “Canada’s music creators and publishers are hugely successful internationally, and Sacem is a vital link, including our Francophone members. We look forward to a continuing mutually beneficial relationship as we work together to fight for the rights and royalties of SOCAN’s more than 160,000 members.” 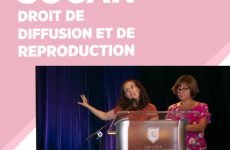 The votes are in! “The Spark,” written and performed by William Prince of Winnipeg has won the 15th annual English SOCAN Songwriting Prize, the most prestigious award for music creation as determined in a public vote.

Music fans from across Canada cast their votes from July 16 to 30 for the 10 finalist songs as determined by a panel of music experts.

In addition to the prestige of winning, William Prince receives the $5,000 first prize, a Yamaha Keyboard, and a $500 gift card from Long & McQuade.

“Songwriting has been a part of my life for so long. ‘The Spark’ goes back to my earliest days of learning how to communicate love and hope through music,” said William Prince. “Winning the SOCAN prize is terrific affirmation of the beginning of my life’s work, and motivation to keep working on the next chapters. Thank you to SOCAN and everyone that took time to vote.”

In a first in SOCAN Songwriting Prize history, each of the remaining nine nominated songs were awarded $500 for the songwriters.

With so many fantastic songs, at a time when music creators have been particularly hard hit by the effects of COVID-19, SOCAN decided to present cash prizes to all finalists, providing some timely relief for several of Canada’s most talented emerging songwriters.

“‘The Spark’ is an incredible song, and William Prince is an incredible and deserving talent,” said Jennifer Brown, interim CEO of SOCAN. “The SOCAN Songwriting Prize is about identifying and celebrating Canada’s next and best music creators, and the 2020 nominees are testament to that fact. This year, we’re thrilled to be able to monetarily award the excellence of all 10 nominees.”

Brad Wheeler, Globe and Mail music & arts journalist and SOCAN Songwriting Prize panelist had this to say about nominating “The Spark” for the prize:  “William Prince isn’t the first songwriter to use fire as a metaphor – Billy Joel started it, don’t let him tell you otherwise – and he won’t be the last. But ‘The Spark’ is gently consuming, with a natural rhythm that takes you by the hand and leads you down the path you need. It’s a love song. Maybe all of his songs are. This one’s built to last, though, with ‘our song’ possibilities.”

The SOCAN Songwriting Prize is the only major songwriting award in Canada where fans vote to determine the winner. Ten outstanding songs created by Canadian songwriters over the past year are nominated by a panel of 15 esteemed music industry experts. The general public is then invited to vote once a day for their favourite song for two weeks to determine the winner.

SOCAN plays no role in determining the nominees or winners, apart from ensuring that they are members of SOCAN. A mirroring competition for songs in French, the Prix de la chanson SOCAN, is conducted separately.

The winner of the Prix de la chanson SOCAN is “Maintenant ou jamais” – written by Félix Dyotte; published by Dare To Care; performed by Evelyne Brochu. 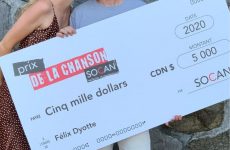 The Canadian Country Music Association (CCMA) has announced its full list of nominees for the 2020 CCMA Awards, and Tenille Townes is leading the race with six nominations.

Following closely behind, with five nominations apiece, are Dean Brody and Brett Kissel, while Dallas Smith, The Reklaws, and James Barker Band have each earned four. The triple nominees for 2020 are Jade Eagleson, Hunter Brothers, MacKenzie Porter, and The Washboard Union.

The Entertainer of the Year Award will see Brett Kissel, The Reklaws, Dallas Smith, Tenille Townes, and Dean Brody vie for the honour.