Here’s the latest edition in our series of stories about the creative meetings between writers and composers. This theme is perfectly suited for brothers Sonny and Érik Caouette, whose stage name is 2Frères; they’re two guys who don’t hesitate to look outside of their family to circle to seek out good songs.

This summer, now drawing to an end, has undoubtedly been a hot one for the young duo 2Frères: “Nous autres,” the title track from their debut album, reached number one on the BDS Top 100 (metropolitan) and Top 100 Correspondents (regional) in late August.

Was it The Francophone song of the Summer of 2015? “Well… I think it’s safe to say yes!” says Sonny, 25. Érik, his older brother by two years, adds, “We didn’t have any expectations when we launched the album, so it’s very nice.” Especially since their first album also became the top-selling Francophone album in Québec (Soundscan and iTunes) during the week of Aug. 11, 2015.

Still, the most impressive achievement remains the fact that a folk-pop song (written and composed by Steve Marin) reached the top of the charts in metroplitan areas (cities), as the genre is generally more popular in regional (rural) markets.

“It’s a bit as if regions are like an incubator: if it works well there, Montréal will be less hesitant to get on board.” – Sonny Caouette of 2Frères

“The song was requested a lot by listeners on Montréal radio stations,” Sonny ventures as an explication. “‘Le Démon du midi’ and ‘Maudite promesse’ played a lot on regional stations, but not much in Montréal. I think it’s a bit like what happened to David Jalbert: he was super popular on regional radio at first, but not so much in the city. Nowadays, everyone knows Jalbert. It’s a bit as if regions are like an incubator: if it works well there, Montréal will be less hesitant to get on board.”

“True,” says Érik, “but on the other hand, ‘Le Démon du midi’ (written and composed by 2Frères and Stéphane Dussault) was first played by CKOI and other stations followed suit. It’s Montréal that got the ball rolling on that one!”

So, are there really two kinds of pop music, one urban and one rural? And if so, have the Caouette brothers found the recipe that can unite those seemingly distinct audiences? One thing is for sure: 2Frères know exactly what kind of music their audience likes. Born in Chapais, in the Jamésie area of Québec, Sonny and Érik caught the music bug from their parents, both amateur musicians, and created their duo while they were still teenagers. They moved to the Eastern Townships in 2008 with the hope of making a living from their music. “We’ve managed to live off of our music for five years now,” says Érik proudly. “How? By playing in bars. We take special requests – Cowboy Fringants, old Corbeau, whatever people like,” explains Sonny. All told, the boys play more than a hundred show a year all over the province.

The idea of coming out with their own material started taking shape when they struck a deal with Mario Pelchat and his MP3 imprint to release their first album. Although being songwriters is relatively new for the two brothers, it seems perfectly natural and easy for them.

“We’ve been playing music for a long time, but writing is brand new,” admits Sonny. “There’s only two songs that are 100% us on the album, ‘M’aimerais-tu pareil’ and ‘Pépé.’” Three more were co-written with Stéphane Dussault, who’s the bass player for Les Respectables, and the rest of them were written by Steve Marin, the album’s producer and artistic director, Alexandre Poulin and lyricist Amélie Laroque. Generally, Sonny will come up with the first draft, the theme, the music, a melody and a few lyrics. “It’s how we work, using Sonny’s basic ideas,” explains Érik.

The Caouettes know what they want: bars are fun, but playing their own material in venues and festivals is even better. “To be honest, the goal is to stop having to play bars,” says Érik. “It’s a great way to learn the trade. You need to know how to win over a crowd that didn’t necessarily come to hear you. But once you’ve won them over and you come back to play the same bar, that crowd is 100% behind you.” 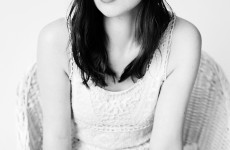 Spending some time honing her songwriting and performance playing gigs around her native Halifax, Ria Mae released her debut album Under Your Skin in 2012, winning herself an East Coast Music Award.

After a lot of writing, grinding and growing she signed to Sony Entertainment via Nettwerk Music in 2015 and dropped her latest single “Clothes Off.” Mixed by five-time Grammy winner Serban Ghenea (known for her work on Taylor Swift’s 1989), the song hit No. 1 on CBC Radio 2 chart.

With more than 200,000 views on YouTube, “Clothes Off” earned her a nomination for Songwriter of the Year at the 2015 East Coast Music Awards.

Her upcoming album will be produced by multi-JUNO Award-winning Canadian rapper/producer Classified, and marks her foray into a more dance-oriented pop sound. Look for it in 2016.