Thomas “Tawgs” Salter still gets goosebumps every time he writes a song.

“I don’t think there’s anything better than writing a song, recording it, listening to it, and seeing people reacting to your idea,” he says. “You write a song and hopefully you transfer the emotions from your songs. Whether it’s a dance song, or an introspective look inside, good songs transfer emotion from the speaker to the listener.”

Whether it’s a dance song, or an introspective look inside, good songs transfer emotion from the speaker to the listener.”

Salter started dabbling in the songwriting when he was 16, though he admits these first attempts weren’t very good. It wasn’t until 1999, at age 23, that he wrote the song that first got him noticed. He was signed to the record label Sony Music Canada with his band Dunk, but didn’t have a publishing deal. The band never took off commercially, and Salter’s wife was then pregnant, so he thought he needed a publishing deal to achieve some financial stability. He got a $1,800 loan from his mother-in-law, bought a computer, and wrote the song “Silver Lining.”

It was strong enough to impress Gary Furniss, president of Sony ATV Music Publishing Canada, who asked Salter to join his team of songwriters. Twelve years later, Salter’s still working with Furniss and vice-president David Quilico, and still enthused about them.

Today, Salter germinates his ideas at his home studio in Ridgeway, Ontario, working up to 16 hours a day. In return, he’s had some songs placed with some major-league artists, having written for everyone from Lights to Colin James to Josh Groban. It was the song “You are Loved (Don’t Give Up)” – which he wrote for Groban’s Awake album  in 2006 – that gave him his biggest break (and a big challenge).

“My publisher had heard Josh was looking for songs,” Salter recalls. “I’d written a string of songs years before that. In a one-week period, I wrote about 10 songs. One, ‘You are Loved,’ they decided to submit. I didn’t think anything would happen. But out of 175 songs, they called me back, said they loved it, but they wanted rewrites.

“At the time I had, like, $1,000 in the bank, two kids, and it was a crazy time,” he says. “I worked for two months straight and rewrote the song three times. I remember getting off the phone with the A&R person and she said it needs a melody that is more classical – When writing for an artist like that, you need to think about the lyrics with nice open vowel sounds for big, long notes. As soon as I hung up the phone, I had the verse melody in my head. I spent a lot of time working on the lyrics and most of it came out. It really opened a lot of doors for me.”

Toronto-via-Halifax foursome Sloan first came to the nation’s attention in 1992 with a smart-ass little pop song called “Underwhelmed”: three chords and the truth as known by then-adolescent singer/bassist Chris Murphy. And while it didn’t quite top the charts at the time, it has since been declared one of the best Canadian songs ever by several polls and remains a fan favourite. Murphy took a break from celebrating the band’s 20th anniversary tour in support of their latest release, The Double Cross, to reminisce about the song’s literary origins.

Thinking back to where you were when you wrote the song, what do you think you were you trying to accomplish?
I think it was a time in my life when I was literally trying to write poetry, something I would never consider doing now. I would have been about 19, just starting my university English degree, the kid writing in his journal. Way later when I was starting Sloan up with Andrew [Scott] we made up a tape for Patrick [Pentland] to learn some songs. I knew that poem I had and made up the music on the spot.

The lyrics set some of the Sloan trademarks, like the puns and wordplay. Did you enjoy that reputation?
We kept getting called clever and it started sounding derogatory. After our third record I figured I had to dumb it down. I would never accept that as a criticism now though. I’m all for being clever and dense.

Which wordplays were you most proud of?
Do you get the one about “rolling your eyes” and then “rolling your Rs” but it’s really your “arse”? That’s a pretty good one.

By the time this came out on your big Geffen debut recording Smeared, some said you were similar to Nirvana. But the original version on the independent Peppermint EP doesn’t sound like Nirvana. What happened?
We didn’t even want it on our Geffen debut; we were tired of it by then. But we realized we were signed, for the most part, to make that a commercial hit. Then a bunch of things happened and it wasn’t. A lot of people talk about it like it was a big hit but really only one radio station in Canada [Toronto’s 102.1 CFNY] played it. I don’t take offence. I don’t think Jimi Hendrix was on the radio that much either.

I remember talking to you when Chart magazine listed “Underwhelmed” as the No. 2 Canadian song of all time. You said, “I’m not interested in making hits, I’m interested in making history.” How do you feel about its legacy now?
I don’t know. It’s so goofy to comment on your own legacy. But I like it. It’s so simple, but part of what it really had is power – the drumming is so powerful… I’m thrilled that the song was in Bob Mersereau’s book of Top 100 Canadian singles. Although I notice that everybody else on the list is a millionaire!

Sloan is well known for sharing all the songwriting credits equally four ways. To what extent do you think that’s part of your success and longevity?
I feel like it’s the number one thing that keeps us together. I think I wrote seven or eight of the songs on the first record, but all I ever wanted to do was be in a band, and splitting the publishing and money four ways made a band where everyone was given an opportunity to share creatively and financially. I don’t know how you would last if you didn’t.

In this digital day and age, with a music industry that continues to feel a little weak in the knees, a fresh-faced new band on a major label will sometimes only get one album to make their mark or forever be cast into obscurity. But in the indie music world, you can actually chart a band’s slow growth as songwriters and then hear them truly galvanize as a band.

Halifax-via-Montreal group Wintersleep’s current and fourth release New Inheritors is easily the band’s crowning moment. The bandmembers finally seem comfortable in their own Chuck Taylors, and the album boasts lush and dense arrangements that still allow them to stretch out. “We were really able to feel different areas and go places we haven’t gone before for this record,” explains singer and guitarist Paul Murphy. “It’s really important for us to push ourselves into uncharted waters. We really don’t want to do the same record twice, so if we get into similar ground or if it sounds like we’re starting to repeat ourselves, we generally won’t go down that road.”

“It’s really important for us to push ourselves into uncharted waters.” – Paul Murphy

With the success of Wintersleep’s third album, 2007’s Welcome to the Night Sky, the world quickly came knocking on its door. The group won a 2008 Juno Award for Best New Band and was hand-picked by Sir Paul McCartney as one of the opening acts for his show on the Halifax Common in July 2009. The hugely successful song “Weighty Ghost” was included in the book The Top 100 Canadian Singles by Bob Mersereau in 2010, and was featured on the TV series Being Human this year and the movie One Week in 2008..

Consequently, the group toured so much that it began almost literally living out of a suitcase. To most songwriters, the road can be a creative vacuum of long drives and busy days, the climate for songwriting being much friendlier in small bedrooms in front of flickering computer screens or in dank rehearsal spaces with overflowing ashtrays. Wintersleep – all of whose four members are credited with songwriting in the band – managed to do the impossible within the tour cycle, carving out half of the songs on New Inheritors during sound checks and the rare day off.

“It can be hard trying to concentrate on writing while being on the road, because it can be so draining and you’re really just focusing on the shows,” says Murphy. “Whenever we’d have a couple of days off or a sound check, the skeletons of songs would just start to appear. Those songs on the record were like little snapshots of the cities we’ve been in and the places we’ve seen.” 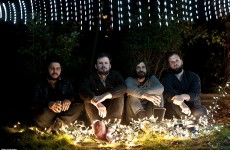 No rest for Wintersleep

“Weighty Ghost” continues to lead listeners to the band