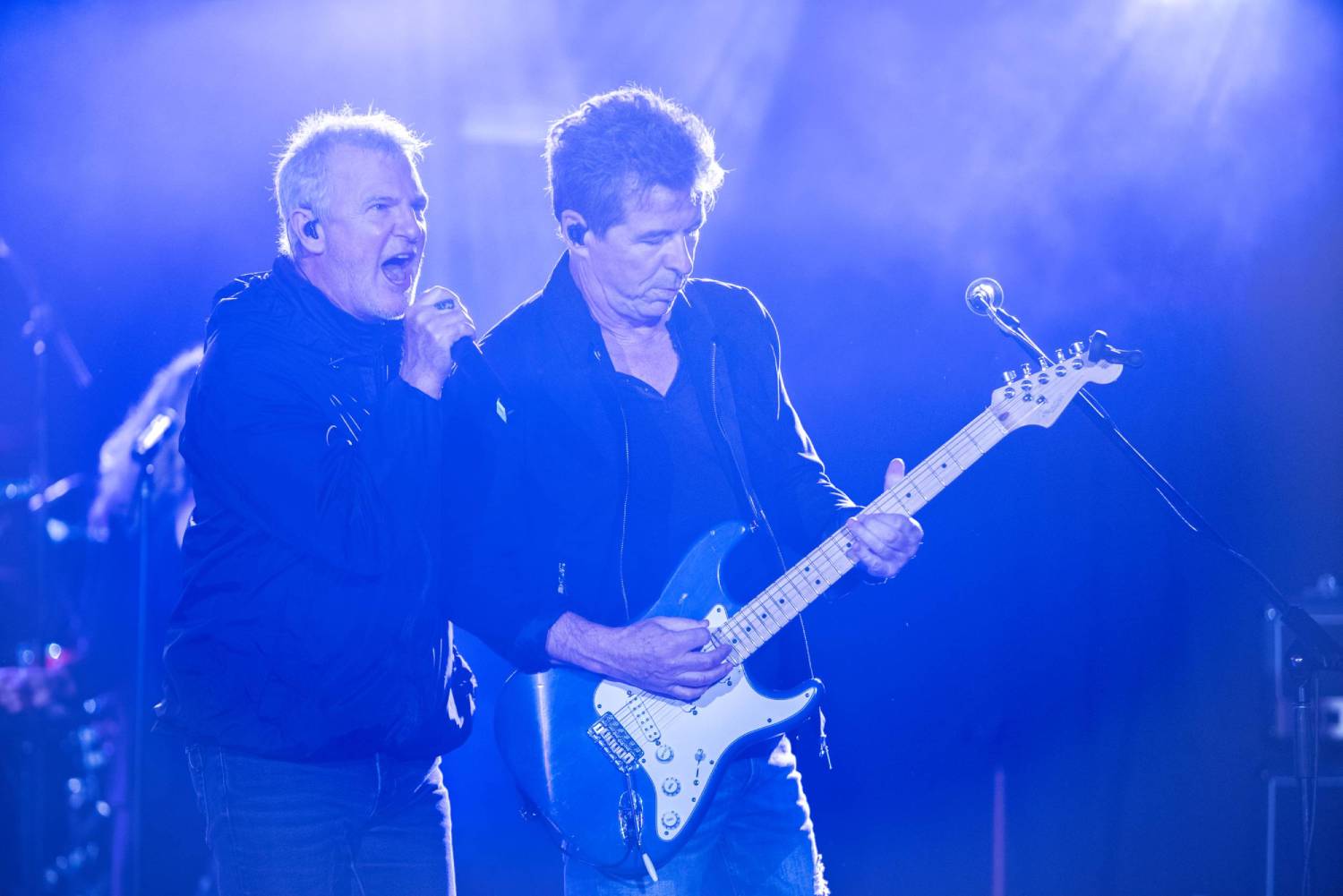 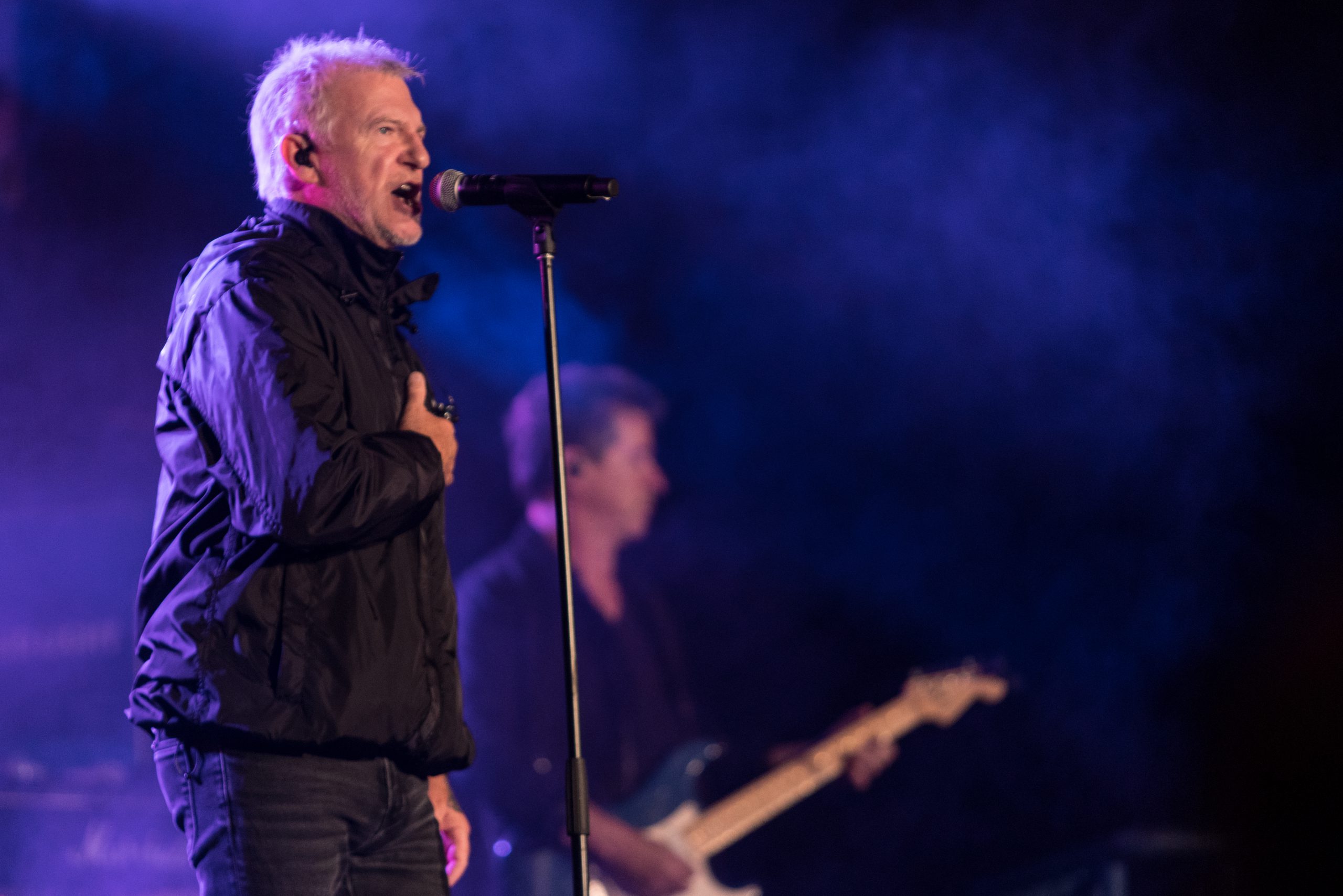 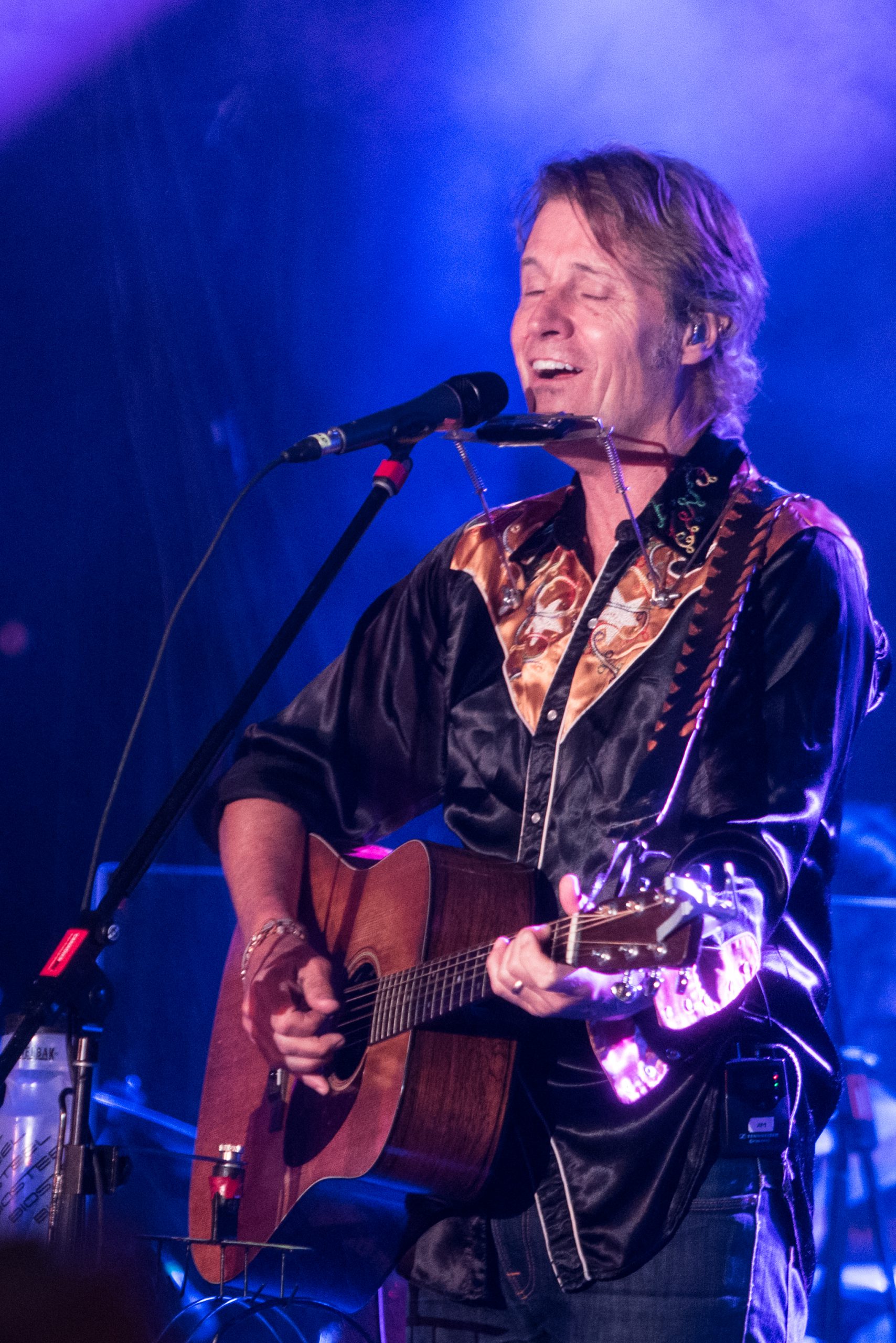 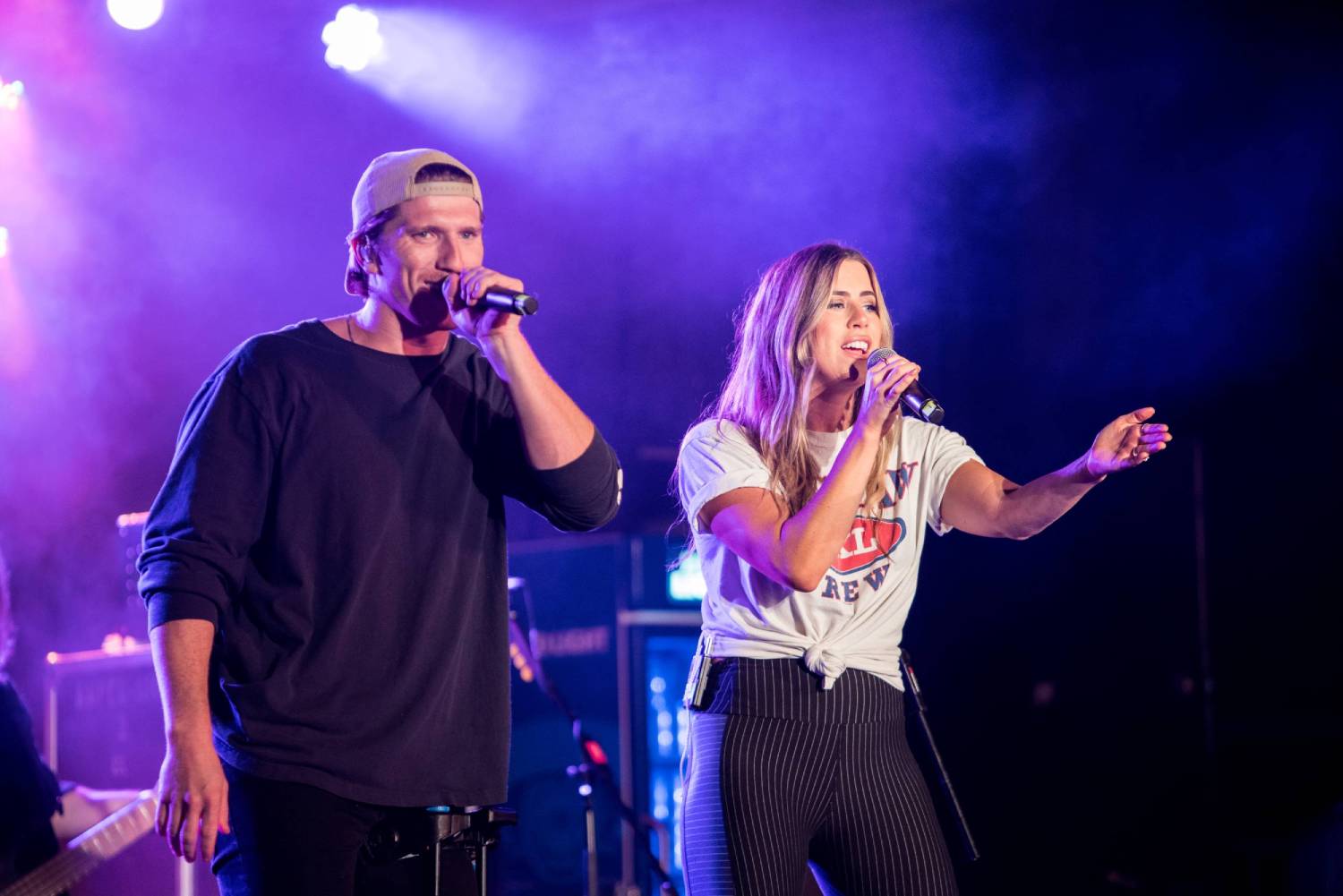 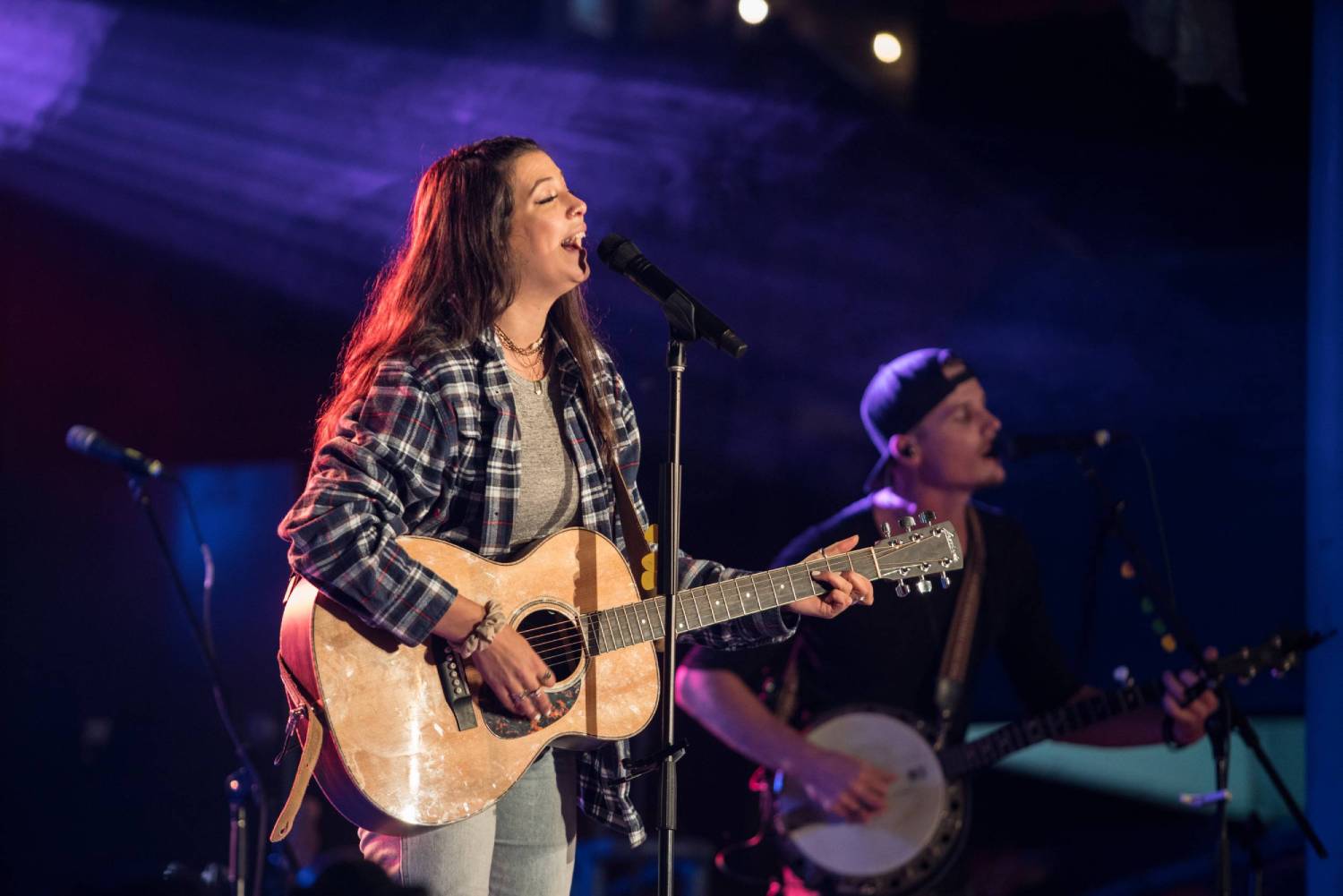 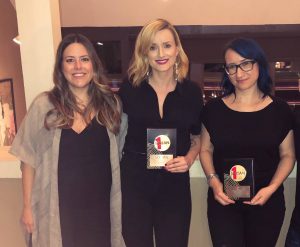 SOCAN’s Melissa Cameron-Passley (left) presents a SOCAN No. 1 Song Award for Tim Hicks’ “What A Song Should Do” to co-writers Emma-Lee (centre) and Karen Kosowski (right).

She may work behind the scenes, but the list of hit singles that Karen Kosowski has had a hand in is long and impressive, straddling multiple genres, formats, and countries.

The Nashville-based Canadian songwriter, producer, musician, SOCAN No. 1 Song Award winner, and SOCAN Song Camp 2019 alumnus has co-written and produced country and pop tracks for artists like Brett Kissel, The Washboard Union, Emma-Lee, Tryon, Melanie Dyer, and breakout country star Mickey Guyton; she even produced Guyton’s contribution to the Metallica tribute album The Black List. But whether she’s working in country, pop, country-pop, or country-pop-metal, Kosowski clearly has star-making production skills – and a talent for collaboration.

That ability to work well with others is part of the reason why Kosowski decided to settle in Nashville after several years as a singer-songwriter and producer in Toronto. “I’d been drifting into country songwriting for a few years, and I felt drawn to Nashville and its whole musical community,” she says. “The thing that makes Nashville songwriting unique is just that there’s so much of it happening, all the time. And everyone is very open to collaboration. People are writing together every day, sometimes twice a day. It’s unlike any scene I’ve ever been part of, and it’s amazing.” 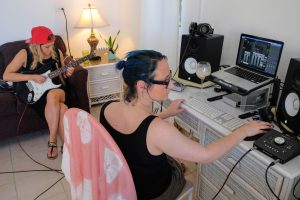 Kosowski (right) recording a guitar track from Lindsay Ell (left) at the CCMA/SOCAN Song Camp in 2019.

Kosowski was trained in classical piano as a child in Winnipeg, picking up a guitar in high school and teaching herself to write and produce her own folk-pop songs. “I started producing long before I knew what I was doing,” she says, “and it’s been a multi-decade process of gradually building up to what I’m doing now. I started getting asked to produce for other artists around 2005, based on the stuff I’d been doing for myself. Probably the biggest thing I produced in Toronto was a single for the band Tryon, who, coincidentally, are from Nashville. It made it into the Top 40 on U.S. pop radio, which is pretty great for an independent band.”

In Nashville, Kosowski’s songwriting and producing developed together as she found a niche that sits somewhere between pop and country. “I tend to gravitate toward projects that are a blend of both,” she says. “I like to mix elements from one with elements from the other and just see what happens. I think it’s progressive, and fun.

“My relationships with artists often start with writing sessions, and then producing stuff I’ve written with them,” she adds. “But if they’re loving what I’m doing, then inevitably I also end up producing other songs for them that I haven’t written. That’s all part of it. I approach it as a tailor-made creative process. Everything you do in the process of producing the record, even writing the song, informs the next step. It’s an organic building process. You’re not done until you’re done, and each idea inspires the next one. Every artist is different, and I just want to help them say what they want to say and customize the experience for them.” 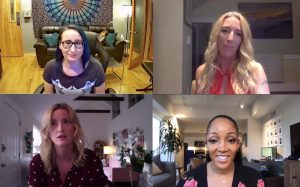 The four co-writers of the song, “What Are You Gonna Tell Her?” Clockwise from top left: Karen Kosowski, Victoria Banks, Mickey Guyton, Emma-Lee.

Right now, Kosowski is particularly excited about her work on the new album by Mickey Guyton, the first Black woman to be nominated for a Grammy for Country Performance. Kosowski even got to play piano behind Guyton’s performance of “Black Like Me” at the 63rd annual Grammy Awards ceremonies in March of 2021. “That’s a great example of a relationship that started with a writing session,” Kosowski says. “I was in Canada at the time, and I changed my flight to come back and write with Mickey because I’d always been a fan of her music.

“I’m so glad I did, because it started a years-long process of writing together that’s built into me getting to work with her on all the amazing stuff she’s doing now – including playing piano with her on The Tonight Show, which is a bucket list item for me. I feel lucky to be involved in such an inspiring project, working with someone who wants to say something meaningful, and is open to creative exploration with their music. That’s the kind of artist that I’m looking to work with.” 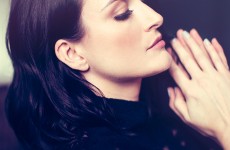 Pro songwriter Emma-Lee had her own recording to do 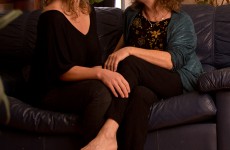 Since Toronto rapper Smiley released his new single and video “Over The Top,” featuring the Certified Lover Boy himself, how “over the top” has his life become?

“Oh, brother – very crazy,” says Smiley (born Alexandre Morand), on the line from Los Angeles. “It’s just so crazy to see the difference. For a Canadian artist, you get high in your city, and then you come to the States and you’re no one. And now it’s different. I’m getting recognized, I’m getting more friends out here. It’s really over the top, to be honest.”

Not that he’s complaining. “It’s all I ever wanted,” he admits. “But I know I have a lot more things to do; this is just the very beginning. This is my first initial song to American audiences.”

Currently in the studio working on a 16-song album featuring multiple producers (including Boi-1da), the rapper from Toronto’s Pelham Park neighbourhood is making the most of his opportunity: he’s cut out the excesses, works out twice daily, and has dropped his weight from 260 pounds to 220 in the past six months or so.

“I want to be running on tours,” says Smiley. “I don’t want a laid-back vibe. And the way I wanted for myself, I never had the time to really eat healthy and go to the gym.  But this is always what I’ve wanted.”

He’s also eating healthier… although he admits his attempts to convert to a vegetarian diet isn’t going smoothly. “When I go vegetarian, I can only do it for a week or so,” he admits. “I get angry and I don’t want to do nothing. I eat once a day. I’ve only eaten at three o’clock, and let’s say I eat salmon and eggs and vegetables. I feel great during that whole week – I feel light, my skin gets clearer, everything feels better. But then I get too hungry and angry.”

He laughs. “I want quick results, so I go on a diet for about a week, and then I go on another diet after that, which includes meat and stuff.”

Maybe his fitness regimen will one day create the buzz that his lackadaisical delivery style does, on such hits as “In My Zone” and “Moving Different.” The latter is what charmed Drake, arguably the world’s biggest music superstar at the moment, to take Smiley under his wing.

“I would say three years ago, I knew he was listening,” says Smiley, who Drake listed as an influence on Scorpion, and whose lyrics to “Free Baby” he posted when Pusha-T outed the existence of his son on “The Story of Adidon.”

“I know I have a lot more things to do; this is just the very beginning”

“Then when he was showing me all that love and stuff, that’s when I got the different love from America and everywhere,” says Smiley. “That was more serious – the real freak-out moment. That’s when I had to have a team around me, management, everything.”

Up until that point, Smiley had been toiling hard with his musical friends in the OLN crew, which included rappers MKsolive, Ryda, and Homie, as well as learning studio tricks from neighbourhood colleague Blacka Da Don.

Initially, it was trial by fire. “When I first did my first song, everyone was saying I was talking,” says Smiley. “They hate me now, but they used to hate me even more. I’ve been rapping five or six years, though at first, it was very bad. It was just like talking, basically. But over the years I’ve gotten better at mastering it.  I just got better, although it wasn’t anything I tried to do.”

Starting with 2018’s Buy. or. Bye. and his mixtape A Tape To Remember, then Road To Buy or Buy 2 (The Playlist), and – released through Warner Music – YYZ-LAX, Smiley has been industriously working on his craft.

“My first grooves were with guys from the neighbourhood, and we had a buzz from there in the city,” he explains. “We were popular and had a few songs where I always had the city buzz. It felt good, but then after the Drake push, it was a whole different story. It made me realize I could literally do this, not just for fun and games… that this could actually be something where I could take care of my family and friends.”

Drake’s presence has loomed large in Smiley’s career to this point, as evidenced by “Over The Top.” “Drake sent it to me,” says Smiley. “As soon as the boy sent me the beat, I was just in the car driving and I stopped and listened to it. He already had his part on the hook, and I cued the intro up – I liked the beginning – and I squeezed off something quick, just in the car.  After that, I just had to write a few verses, and then I picked the right ones.”

When it comes to his songs, Smiley works quickly at first. “If I’m really focused and I’m locked in a room by myself, I usually write a hook and a verse just to get the idea out there,” he explains. “Then, whoever’s producing will choose the songs that have the most potential and I’ll finish it. But just for a hook and a verse, it’ll probably take me 48 minutes.”

Smiley says he writes his ideas in the Notes app on his cellphone. “Alone in the studio, I’ll kind of freestyle, but  that’s not my specialty,” he says. “I like to just write in my phone Notes. I’m freestyling now, because sometimes you come up with some good stuff, y’know? [But usually] I’ll go through my e-mails as people send me beats, I’ll save it to my Notes, and then as I play it, I’ll start writing to it.”

Smiley, now part of Drake’s Warner-distributed OVO Sound crew, is eager to establish himself South of the border. “I feel like I’m unique,” he says.  “No one sounds like me. Once I release this album, too, they’ll understand me more.” And he’s grateful for the Drizzy career boost. “He put me in this position,” says Smiley, “and he’s been like a big brother to me.”