The Affiliate Composer two-year residency is one of the most significant and prestigious opportunities for an emerging composer in Canada. It provides a chance to compose at least two works for one of the country’s finest orchestras, allows the composer to gain insights into the complexities of programming at the highest artistic level, and catapults them to national, and even international, prominence.

In the role of TSO Affiliate Composer, LeBel will be fully integrated into all areas of the organization, with access to its inner workings, and will also participate in educational work with young audiences as part of the orchestra’s community-engagement programs. She’ll work closely with TSO Interim Artistic Director Sir Andrew Davis, Composer Advisor Gary Kulesha, and the artistic staff. LeBel succeeds Jordan Pal, who held the Affiliate Composer position from September 2015 to August 2018.

Described as having a “deft compositional hand, unwilling to hurry ideas,” and a style that’s “impressively subtle and sensuous,” LeBel specializes in concert-music composition focusing on textural landscapes, resonance, and variances in colour. Her compositions have been performed and/or recorded across North and South America, Europe, and the U.K. Her honours include the Toronto Arts Foundation Emerging Artist Award, Canadian Music Centre Toronto Emerging Composer Award, and the Canadian Federation of University Women Elizabeth Massey Award. LeBel has completed a Doctorate in Composition at the University of Toronto, a BFA and MA in Music at York University, and an Honours Diploma in Audio Engineering at The Harris Institute for the Arts.

“Emilie is one of the most exciting young talents in the world of contemporary composition. Her music reflects her intelligence and audaciousness,” says Sir Andrew Davis. “Emilie brings to us her exceptional energy and versatility. Already known as an engaging communicator, and respected for her passionate advocacy work, she’ll be a brilliant ambassador for the TSO. I’m thrilled to welcome Emilie to the TSO’s artistic team.”

SOCAN is mourning the passing of our member Brad Daymond, best known for co-writing the hits “Broken Bones” and “You’re a Superstar” as a member of JUNO Award-winning dance trio Love Inc., and also known in the music industry for his work with boy-band ‘N Sync at the height of their popularity. Daymond, originally from Barrie, Ontario, passed away August 3, 2018, at age 48, from complications due to cardiac arrest.

Daymond worked alongside DJ Chris Sheppard and singer Simone Denny in Love Inc., who earned two JUNO Awards, both for Best Dance Recording, in 1999 for “Broken Bones” and in 2001 for “Into the Night.” The group topped the charts with a handful of dance singles that garnered heavy rotation on MuchMusic, and achieved an unexpected second wave of popularity in Europe years later. “You’re a Superstar,” a co-write with Sheppard and Vince Degiorgio – who co-wrote extensively with Daymond for Love Inc. – has become an enduring favourite to this day in the U.K., resonating deeply with people there.

After Love Inc. disbanded, Daymond formed a production duo with Alex Greggs, Riprock ‘n’ Alex G – for which Degiorgio served as the A&R representative – and rode a wave of teen pop to great success. Together, the duo produced remixes for the likes of Britney Spears, Ricky Martin, Jessica Simpson, and Christina Aguilera, that often appeared on their singles. Some remixes of ‘N Sync’s early singles were noticed by the group, and Daymond was hired to co-write two songs for their second album No Strings Attached in 2000. He also co-created three songs for their third album, Celebrity, in 2001. Daymond continued to write, on projects including Schizophrenic, ‘N Sync member JC Chasez’s debut album. He also served as a judge on the television singing competition Popstars 2.

“It didn’t matter what the project, Brad was always my first pick for working on everything from Republica to ‘N Sync,” says Degiorgio, a longtime music publisher who founded, owns and operates Cymba Music Publishing, and now serves as President of the Board of Directors of The Canadian Music Publishers Association. “He was incredibly generous in the studio. When you wrote with him, you really did write with him. He had talent to burn, and half the time we were laughing in the studio. Whenever we wrote, he just wanted to win the day, and on most days, we did. For me, ‘Superstar’ was only a part of Brad’s story; as a writer, he composed hooks and melodies like a meteor, and made it easy for his co-writers. He was that good. Whether in my capacity as a songwriter, or an A&R guy when he teamed up with his partner Alex Greggs, I could always trust him to get what I wanted.”

SOCAN extends its deepest condolences to Daymond’s family and friends, both inside and outside of the music industry.

The 2018 edition of the Montréal SOCAN Awards Gala will once again salute the remarkable work of Francophone music publishers with the Publisher of the Year Award. Publishers are invited to submit their nominations starting today.

The award recognizes a publisher member who contributed in a significant and positive manner to the music industry and creative community during the year leading up to the Gala.

The eligibility period for the 2018 edition of the SOCAN Awards is from January 1 to December 31, 2017, and only the accomplishments which occurred during this period will be taken into consideration. A jury of music industry professionals will evaluate all the nominations.

To be eligible, a publisher must be based in Canada, and their repertoire must be in large part Francophone, or having had a significant Francophone impact, creatively and commercially. A publisher with a representative who sits on the selection committee is not eligible for this award.

Eligible publishers must submit nominations to Stéphanie Falco (stephanie.falco@socan.com) no later than August 30, 2018, at 5:00 p.m., EDT.

The Publisher of the Year Award will be presented during the Montréal SOCAN Awards Gala on Tuesday, October 2, 2018. 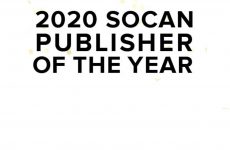 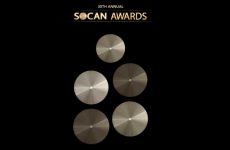