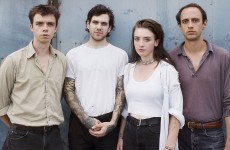 Pierre Blondo and John-Adam Howard know the codes of pop music like few others in Québec. Operating under the name House of Wolf, the two independent musicians have set their sights on the international market and their ambitions are well measured.

Their catalogue of productions includes R&B, hip-hop, country, and soul, and reflects the innate versatility and ease of its creators. “The common thread in all our influences is our love of pop music,” says Pierre Blondo, the duo’s official spokesperson. “And nowadays, pop has morphed into a melting pot that can include a lot of different things. Initially, we’re guided by our feelings, and then we embark on a quest to find that unknown algorithm that may help us reaches the masses.”

Far from getting lost in an illogical, overloaded mish-mash of genres, House of Wolf has a signature sound that’s in synch with the times. Their aesthetics might appear simple, but they devote countless hours to crafting and fine-tuning their work. “We try to be spontaneous and err towards removing layers rather than multiplying them,” says Blondo. “We want the vocals to take all the space they need. It’s a lot of work, however, to arrive to the right amount of guitars and pads. We start our sessions with a discussion, and as soon as we feel we’re drifting away, we re-centre ourselves on the initial feeling. It’s a fine line to find the right emotion, and each time is almost like torture. It’s as if we forget how to produce!”

The two Québec City musicians know how to find the through line in their human and artistic chemistry. A businessman at heart, Blondo is the more analytical half of the duo while John-Adam Howard is the more creative one. “His only focus is creation,” says Blondo. “Every morning he looks at new plug-ins and the latest tutorials… He has a hardcore love of music, whereas I’m unable to think about music without thinking about the business side of it. So when he drifts too far in that direction, I can reel him back, and he does the same for me when I become too robot-like. Our opposites match.”

Blondo started producing music after his studies at L.A.’s Musicians Institute, and he’s always dreamt of living from his passion. In 2016, A&R businessman and consultant Mike Goldfarb tapped him to set up a creative branch for his production company Talent Nation. “He wanted me to compose three songs for like eight artists,” says Blondo. “There’s no way I could do that on my own! I started looking locally for people to collaborate with, and that’s when I found John-Adam and Vincent Carrier (a producer who left the group a few months later). My goal was to set up a songwriting mini-camp for three in an Airbnb in Toronto, and take charge of all the expenses so that we could keep whatever profits would materialize down the line from those songs. But four months in an Airbnb in Toronto is incredibly expensive, so it turns out I didn’t make any money at all,” he remembers, laughing.

During that time Blondo discovered a young singer from Wisconsin. Revealed through a contest organized by iHeartRadio that involved sending a video of yourself singing a Zayne Malik song in order to win tickets for his show, Carlie Hanson was spotted by Mike Goldfarb on Instagram. “She was like this young, female Bieber with the perfect American dream story,” he says. “She’s from Wisconsin, she works at a McDonald’s, her mom has three jobs, she’s super-humble… We asked her mom if she could come to Toronto. The meeting was very cool and we rented another Airbnb in L.A. in the fall of 2016 so we could work on a few songs.”

With the help of American lyricist Dale Anthoni, House of Wolf produced the song “Only One,” which launched Hanson’s career in March of 2018, most notably through its inclusion on a list of Taylor Swift’s favourite songs. The duo is still reaping the benefits of meeting Hanson, and their relationship has solidified with the production of the single “Daze Inn” last spring. “It’s obviously good to produce for established artists, but developing the career of a specific artist is very helpful to gain a reputation within the industry,” says Blondo. “It shows you can develop a specific sound.”

Last June, the duo added another feather in its cap wth a placement for California trio Cheat Codes. Co-written with the popular songwriting collective The Six and Dan Smith, of British indie pop group Bastille, “Heaven” racked up more than a million plays within a week. “Initially, we didn’t even know it was Bastille’s singer who penned the melodies!” says Blondo. “As a matter of fact, we also didn’t know that we were competing with other producers, and in the end, we turned the song around so much that the label flipped.”

Spurred on by this unexpected opportunity, which led them to produce for R&B singer Jeremih and singer Anna Clendening, the two acolytes are thinking about moving back to the American West Coast. “We’ve done a lot of long-distance songwriting, and now we want to spend some time in L.A. so we can fully benefit from our contacts,” says Blondo. “Our strategy is still to remain independent, because we want to avoid signing a bad deal with a publisher who doesn’t give a fuck about us. We want to make sure we fully show what we’re capable of before signing any kind of deal. We believe in the long game.”