Eight SOCAN #ComposersWhoScore were honoured in musical categories of the 2019 Canadian Screen Awards. 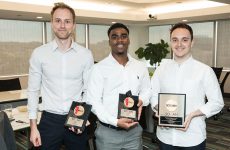