After winning the SOCAN Foundation Indigenous Songwriter of the Year Award at the Indigenous Music Awards in 2019, Anachnid released her debut album, Dreamweaver, in February of 2020. She’s at the very beginning of her musical journey, which started in the summer of 2018 –  thanks to a handful of songs online – but that journey will be on hiatus during the current health crisis. “I was supposed to attend a SOCAN Song Camp…” says the musician with resignation. 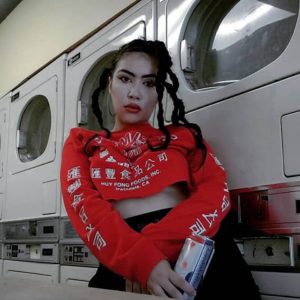 Luckily, self-isolation doesn’t worry Kiki Harper, safe in her apartment in Montréal’s Latin Quarter. “Being in isolation, like everyone else right now, is quite easy for me,” she says. “When I recorded my album, I didn’t move two-and-a-half months!” That’s because of stupid accident that happened in Finland: wanting to hurry and catch up with a friend, she slipped on the edge of a sidewalk and broke her ankle in three places. “I actually had to learn to crawl before I could re-learn to walk,” she explains with a giggle. “You should never hurry for anyone.”

The accident left its mark on Dreamweaver, an album built around introspective songs, with subdued synthetic hues, where Anachnid’s voice is sometimes menacing, sometimes hushed and hyper-sensitive. This stems from the feminine and masculine energies brewing inside the artist since those fractures. “The climax of all that comes on the song ‘Anachnid,’ right in the middle of the album,” she says, about the song that references her many weeks of immobility.

Harper claims her “urban Indigenous” identity through singing and rapping over house music, break-beats, dance-pop, and trap, a well-defined musical universe, despite very eclectic rhythms. “Working with just two composer-producers [Ashlan Phoenix Grey and Emmanuel Alias] allowed me to produce something cohesive… The release of my first album has spurred me on to do even more. This album allowed me to prove that I’m able to do several styles of music while remaining true to my spirit.”

Her musical approach is in the image of her album: modern and spontaneous. “I write my lyrics on the spot, in the studio, by digging into my emotions,” she says. “I’ll have an idea of the sound I want, and this gives me ideas for the lyrics; if I feel like dancing, I’ll imagine a house beat, and then I hear notes. I call it ‘downloading’ a song, from my head to a piece of paper, live in the studio. Then we create our samples and integrate them in the tracks,” says the musician, who’s taking advantage of self-isolation to learn to write on her own, via her computer.

Music has been part of her life since childhood, as are stone-carving and painting, passions she inherited from her mother, an artist and entrepreneur. “As for my dad, he has a natural talent for playing guitar,” says Anachnid, of Ojib-Cree Nation heritage, who sings about identity, cultural differences, integration (listen to the powerful “Windigo” and “America”) and ostracism (“Braids”).

“I’ve been writing songs since my childhood; my mother used to push me to enroll in arts camps where they made films and I wrote the music,” says Anachnid. “I’ve been playing music for a long time, but I’m quite introverted. Singing in front of an audience was a challenge for me. I had a hard time making my voice heard and communicating with people; now, I increasingly understand what I do and why I’m here.”

“I learned to sing with wolves,” she says, referring to her tight bond with her godfather and godmother, with whom she “grew up in the woods. They would watch over me when my mom would go to work; they’re the ones who taught me that if you answer back to a wolf who cries in the forest, he’ll answer back to evaluate how far away you are. If you cry and it answers back, you know it will not come closer than two kilometers from you to respect your hunting ground. It’s the music of nature.” 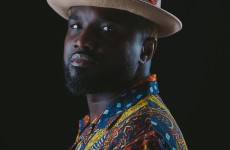 “If I’ve done one good thing in my life, it’s coming here”

Evangeline Gentle starts all their live shows with the same short a cappella song.

“There’s nothing more vulnerable than getting onstage in front of bunch of people and just singing with no band,” says the Scottish-born, Peterborough-based, indie-folk singer-songwriter. “But even when life tries to harden you, staying soft is what actually brings us closer. I feel like that with the audience.”

The concept of embracing vulnerability as an act of self-empowerment is a potent theme on Gentle’s self-titled debut. Released in September 2019, the album showcases confessional songwriting, in which they candidly sing about self-medicating with alcohol, insecurity in relationships, and coping with depression.

They spent three years working on the album with producer Jim Bryson, who asked Gentle if they wanted to record demos together after one of Gentle’s gigs. “In the first year of writing, I was struggling with mental health issues. You can really hear that in some of the songs,” they say. For example, on “Even If,” Gentle wistfully sings, “I smoke enough to kill me, and I drink enough to drown.”

“In the first year of writing, I was struggling with mental health issues”

Growing up, Carole King and the Dixie Chicks inspired Gentle to write their first songs and learn how to play guitar, and would later influence their folk-driven sound. “I listened to a lot of female singer-songwriters and wanted to emulate that,” Gentle says. “But over the years, I’ve begun to explore other genres.”

This exploration is evident on “Ordinary People,” where banjo and acoustic guitar weave around shimmering synth lines. For their next album, Gentle plans to experiment with new genres, like pairing pop arrangements with politically-charged lyrics.

Gentle sees music not only as a way to communicate important messages to a broad audience, but also as an anchor for inter-connectedness. It’s something they realized while seeing Canadian musician Rae Spoon perform in high school.

“I would look around me and see all of these other queer people and think that this feels so cool. This is a place of community for me,” says Gentle. “It made me realize the impact an artist can have on an audience, and that my own music could possibly do that for other people, too.”

Waters lives in the West end of Toronto with musicians as roommates, including her longtime collaborator, producer, and best friend, Sam Willows. Many of the songs from her upcoming sophomore EP If It Comes Down To It, due this summer, were born out of laid-back, late-night jam sessions at the house after drinking a few beers. They were then recorded in Willows’s basement home studio.

“The songs were all written pretty quickly,” she says. “It was all about catching that vibe. They’re a little more raw, and a little more cut-back.”

Waters, of Métis heritage, grew up in Shelburne, Ont., a small town around an hour Northwest of Toronto. She grew up surrounded by music – both her parents were musicians and toured across Canada – and eventually moved to Toronto to start her own career.

“Sometimes it feels like you’ll never succeed, but you have to push through no matter what”

Last year was a big one for her: Waters released her debut EP Almost Naked, was hand-picked to tour as an opening act for City and Colour, and headlined the venerable Horseshoe Tavern in Toronto.  Building from that momentum, she immediately started working on her follow-up EP, a soulful collection of songs revealing her moody, raspy voice and knack for catchy choruses.

On the single “Rabbit Hole,” Waters sings about the struggles of substance abuse over arpeggiating fingerpicking, while on slow-burner “Fox Song,” she sings “the way that my insides move every time I get to close you” as her acoustic guitar weaves around pulsating drums. “It’s about someone that I used to serve at my old bar,” laughs Waters. “It grew into this epic track.” “Quantum Physics,” the first song she wrote on classical guitar, is full of her own haunting harmonies echoing in the background.

Like so musicians across Canada, Waters’ plans for touring are currently on hold. But she doesn’t shy away from confronting challenges in life. In fact, it’s a theme that courses through the album. “I feel like everybody has something that they’re working on, or going through,” says Waters. “Sometimes it feels like you’ll never succeed, but you have to push through no matter what.” 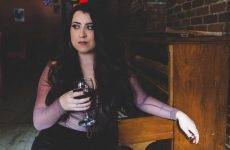